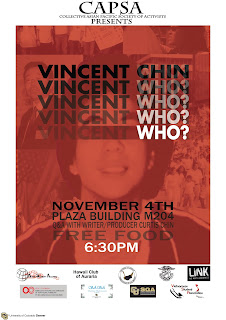 Come to the screening of the powerful documentary Vincet Who? This movie tells the story of the Vincent Chin murder and the historical importance it has on the Asian Community.

Chin was a 27 year old Chinese-American who was beaten to death with a baseball bat by two Detroit autoworkers, who had mistakenly thought that he was Japanese. The lenient sentence handed down to the killers (no jail time, $3790 fine and 3 years probation) ignited a national protest and marked the beginning of the AAPI civil rights movement.

Admission is FREE and refreshments will be provided.
November 4th, 6:30pm
Plaza Building M204
University of Denver - Auraria Campus
(Auraria Parkway and Speer Blvd)
There will be a Question and Answer session immediately after the screening with
Producer Curtis Chin.
Email ThisBlogThis!Share to TwitterShare to FacebookShare to Pinterest 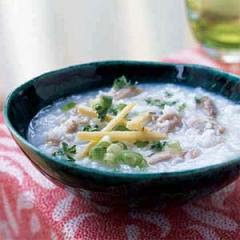 All OCA Members are invited to attend the annual election meeting to place their votes for the candidates. There are four open board seats to be filled to serve on the OCA Colorado Board of Directors for the terms of 2012-2013. Then stay for.....

The First OCA Congee Cook-Off!!!
Show everyone how delicious your congee is.
Winner will be decided by all attendees.

If you are interested in putting your congee to the test,
please contact Febra Johnson
email: febbiej@gmail.com or 720.988.9004

Want to run for a Board of Directors seat? Need directions to the location? Please contact ocacolorado@gmail.com
Email ThisBlogThis!Share to TwitterShare to FacebookShare to Pinterest

Three quarters of a century after the event was initially conceived, the art of Chinese master Xu Beihong is at last coming to America. The exhibition will be on view in the Denver Art Museum from October 30, 2011 through January 29, 2012. Dr. Xu Qingping’s lecture, “The Chinese Cultural Spirit in Xu Beihong’s Works” will be delivered from 2:00 pm – 3:00 pm on Oct. 30, 2011 in the Lower Level lecture room of Denver Art Museum’s North Building. The lecture will be open to those who have purchased museum admission. Artist and art historian Xu Qingping (Xu Beihong’s son) is one of the most knowledgeable scholars on Xu Beihong.

Xu Beihong: Pioneer of Modern Chinese Painting will be the first major exhibition of art by Xu Beihong in the United States. This comprehensive show of one of China’s

most beloved and revered artists was organized by the Denver Art Museum in Denver, Colorado, in collaboration with the Xu Beihong Memorial Museum in Beijing, China.

Xu is considered the father of modern Chinese figurative painting. One of the first Chinese artists to study in Europe, he successfully integrated Western sketching and oil painting with traditional Chinese painting style. His creative work and his extensive teaching activities provided a new direction for Chinese art and art education.

The art of Xu Beihong speaks not only to the sophisticated elite but even more directly to the common people of his time. Xu’s ink brush horse paintings have reached iconic stature, forcefully and eloquently expressing the determination of the Chinese people in their struggles to master their own destiny.

Most of the 61 works, including Xu Beihong’s major ink brush and oil paintings, have never been displayed in the United States. Some have never been seen outside of China. This landmark exhibit will trace the full length of Xu’s career—from early landscape paintings and drawings created during his studies in Europe, to his iconic horse paintings, his renowned historical paintings, and his portraits of Mohandas Gandhi and Mao Zedong.

Xu Beihong made an impact like a cultural ambassador for China. He not only influenced art within his own country, he introduced his new style of painting to the world, reshaping international perceptions of Chinese painting. His work was exhibited widely throughout Asia. In 1933-34 he led the first influential exhibition of contemporary Chinese painting in Europe, exhibiting his own works as well as those by more than seventy other major Chinese artists. In 1941, he was ready to mount an exhibition of his work in the United States, sponsored by the American Aid to China Federation. He yearned to promote international recognition of China’s artistic and cultural heritage, particularly during a time when China’s War of Resistance against Japan was entering the most difficult phase. The show was halted with the news of the Japanese attacks on Pearl Harbor.

Seventy years later, this major show at the Denver Art Museum will fulfill Xu’s mission as a cultural ambassador but in a profoundly changed world, in which Americans are now seeking a deeper understanding of Chinese culture—a culture eloquently expressed by the Chinese master Xu Beihong.

A full catalogue chronicles Xu’s stylistic development and will be available for purchase in the Museum Shop.

Brief Biography of Xu Beihong Xu Beihong was born into a poor family on July 19, 1895 in Yixing, Jiangsu Province. He studied Chinese classics, calligraphy, seal carving and traditional Chinese painting from his father, a self-taught artist.

Xu Beihong gained a government scholarship to study in France where he attended the École Nationale Supérieure des Beaux-Arts. Between 1919 and 1927, he studied sketching and oil painting in France, Germany, Belgium, Italy and Switzerland. Returning to China in 1927, he advocated revitalizing the tradition of learning from nature in traditional Chinese painting and integrating Western techniques in order to improve and develop Chinese painting. He was the first to incorporate European sketching and oil painting as systematic disciplines into the curriculum at major art institutions.

From 1927 until his death in 1953, Xu trained several generations of students in his new direction. Many of them became accomplished artists and art educators, who continued to influence Chinese painting in modern times. Since 1954, 1,200 of Xu’s original drawings, sketches, oils, and traditional Chinese paintings have been kept and displayed by the Xu Beihong Memorial Museum in Beijing. (www.xubeihong.org/English/museum.htm)